On Wednesday morning, the Star published my commentary on free speech.  Little did I know when I wrote it or the editors when they published it, the whole concept of free speech online was about to blow up in an incredibly spectacular way.

The New York Post dropped a bombshell story, showing emails from Hunter Biden to various Ukrainian figures.  This story included the allegation, apparently supported by emails, that Hunter Biden had introduced executives of the Burisma company to his father, the then sitting Vice President.  Hunter Biden was paid lavishly for his role. 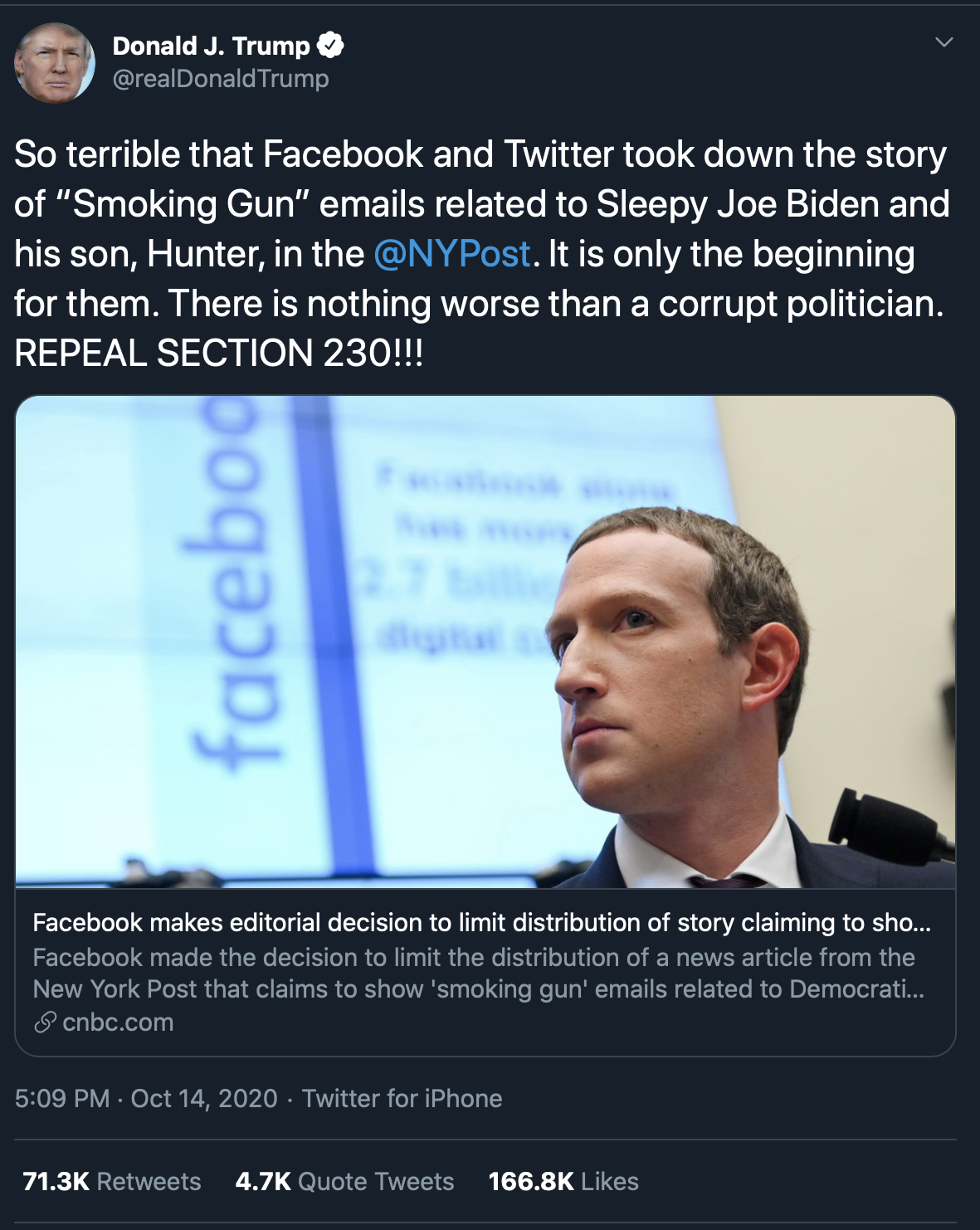 Twitter gave the lame excuse that it was blocking “hacked” or personal material.  Of course, Twitter showed no such reservations when it promoted the “news” about Donald Trump’s taxes being leaked. Nor did it have any reservations when the home addresses of Republican lawmakers and conservative personalities were published on Twitter.

Republican outrage was instant. President Trump railed against Facebook and Twitter online and in a campaign stop.  Missouri Senator Josh Hawley called for an immediate investigation by the Federal Election Commission to what he called an in kind contribution to the Biden Campaign.

President Trump’s tweet called for repeal of Section 230 of the Communications Decency Act of 1996.  Section 230 says that “No provider or user of an interactive computer service shall be treated as the publisher or speaker of any information provided by another information content provider.”  Translation, this means that in most instances, these provides, such as Twitter and Facebook, are immune to lawsuits arising from their decisions or what they do or do not publish.  The theory behind the law was simple.  To encourage the growth of these platforms, they would not be treated as publishers for what third parties put on their site.

But along with that theory, was the idea that these platforms would not censor ideas either.

Any thought that big tech does not censor ideas has been disproved years ago.

Big Tech works against Republicans and conservatives.  Ninety percent of their donations go to Democrats.  They shadowban conservatives. They suppress search results on the major search engines.  They are not simply an interactive computer service. They are a publisher in every sense of the word, since they are controlling the content that is put on their sites.

Even more, they are a defacto monopoly.  Google holds 92.26% of the search engine market.   There are no major social media competitors to Facebook and Twitter.

Republicans are really good at outrage, but they fail every time in execution. In fact, most of the time, they don’t even try to go beyond outrage.

If we are going to have a fair internet, a couple of things need to happen. First, President Trump is right. Repeal Section 230.   If these tech giants want to act like publishers, let them face the same legal liability publishers do.

The other thing is, these tech giants are monopolies and they must be broken up.

This will only happen if President Trump is reelected, the Republicans retain control of the Senate and take control of the House of Representatives.  Even then, it is not guaranteed.

When John Kerry ran for President, at least one columnist said media bias would be worth at least fifteen points to him.

That is nothing compared to the power big tech has to influence or stifle political thought. That is dangerous to a free society and this time the Republicans must do more than simply be outraged.