Virginia Republican congressional candidates and other conservative politicians gathered at a Chesterfield County restaurant in Midlothian on Monday night to fire up a small crowd of voters before Tuesday’s general election.

Hosted by Virginia Beach attorney, Tim Anderson, the event was intended to energize the crowd ahead of the election and help bolster the campaigns of Del. Nick Freitas (R-Culpepper), veteran Daniel Gade and pastor Leon Benjamin.

A common theme that emerged throughout the event was a high level of confidence among the candidates, campaign staffers and the group of 100 or so attendees. 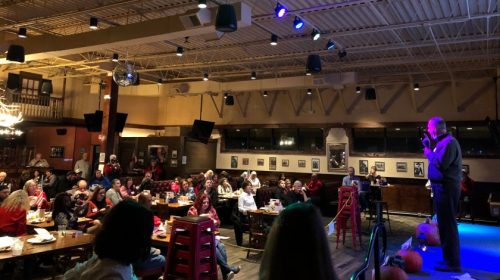 “We feel great. Look, we know it’s going to be a close race and we always knew it was going to be a close race, but our early voting numbers are higher than we expected,” Freitas said in an interview with The Virginia Star. “The polling that we’ve done shows that Republicans are still overwhelmingly planning to vote on Election Day, so we expect a good turnout [Tuesday].”

Freitas, who is facing incumbent Representative Abigail Spanberger (D-VA-07) for Virginia’s 7th District, was the first candidate to speak to the crowd.

In Freitas’ brief speech, he touched on the contrast in the visions of the country between Republicans and Democrats, applauded some of President Donald Trump’s accomplishments so far such as cutting taxes and regulations, restrengthening the military and brokering peace deals, and, lastly, implored the crowd to never falter in their core beliefs as Americans no matter what is being presented by others.

After giving out a handful of campaign t-shirts and showcasing a custom Trump football jersey, to be present to the president after winning the election, the perpetually-outspoken Benjamin gave an impassioned speech to the group.

Currently battling incumbent Representative Donald McEachin (D-VA-04), Benjamin first proclaimed that a red wave was coming to the Commonwealth. Next, Benjamin asserted that he would fund police departments, push for criminal justice reform, reopen Virginia and stomp out any racism, Marxism or communism in the country. 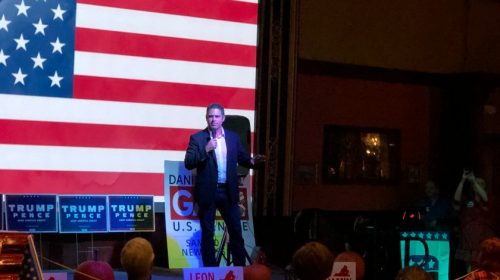 Gade, who was not in attendance, was represented on stage by his campaign manager Kevin Loran Hubbard and Kiggans.

Afterward, Hubbard told The Star the campaign believes Gade will do well in the election and will shock a lot of people on Tuesday.

“Gade is extremely confident [that he can win],” Hubbard said. “You look at the guy and you can just tell that he is the type of person that doesn’t let an obstacle get in his way.”

Hubbard also mentioned that the campaign’s internal numbers from a poll conducted three weeks ago showed Gade only behind Warner by seven points.

With Election Day finally upon the Commonwealth, Freitas, Gade and Benjamin must now rely on the voters to decide their congressional fate.