CANTON, Georgia – Vice President Mike Pence, looking and sounding very much like an election winner, told thousands of supporters in Canton, GA Friday that they must pray for America and that they also must vote for U.S. Sen. David Perdue (R-GA) and U.S. Sen. Kelly Loeffler (R-GA) in January of next year.

To motivate the crowd, Pence said the GOP’s agenda for America “is one of greatness” while Democrats’ agenda “is American decline.” 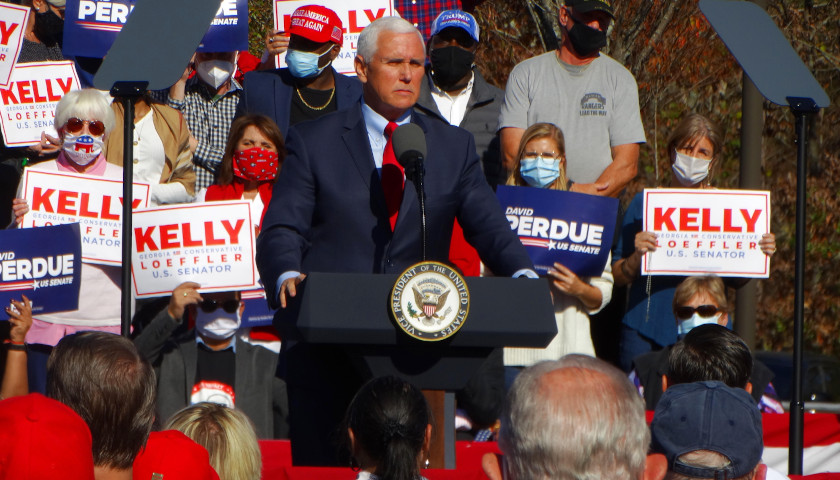 As reported, Perdue and Loeffler, both Republicans, are on the January 5, 2021 ballot for the U.S. Senate against two Democrats, Jon Ossoff and Raphael Warnock, respectively.

Pence thanked Loeffler, as he said that she was the first U.S. senator to call to confirm U.S. Supreme Court Justice Amy Coney Barrett.

“You all remember when Judge Amy Coney Barrett went through her confirmation two years ago. And the leading Democrat on the Senate Judiciary Committee said she was concerned about Judge Barrett’s Catholic faith. She said ‘the dogma lives loudly within you,’” Pence said Friday.

“And their [liberal] allies in Hollywood have attacked Judge Barrett’s faith ever since. But I have news for the Democrats in Washington and the two Democrats who want to join them. That dogma lives loudly in me. That dogma lives loudly in you. And the right to live and worship according to the dictates of our faith lives loudly in the Constitution of the United States of America. That is why for our liberties, for our future, for all the foundation of values that have made this country great, we need Senator David Perdue and Senator Kelly Loeffler back in the United States Senate.”

Loeffler addressed the crowd. She said Georgia conservatives “are the firewall against socialism in this country.” And she encouraged her supporters to vote early.

Perdue, meanwhile, said the consequences of not voting are too high.

“We are the last line of defense against this country making a change to the left that we won’t get to undo for maybe two, three, four, or five generations,” Perdue said.

“We cannot let that happen.”

Many people in the crowd chanted “Stop The Steal” over and over again, referring to allegations that people committed vote fraud in the 2020 U.S. presidential election to put former Vice President Joe Biden over the top.

Pence told the crowd that U.S. President Donald Trump, the incumbent, “will keep fighting until every legal vote is counted and every illegal vote is thrown out.”

“We are going into an unknowable season. We don’t know what the future holds, but in my house we know who holds the future,” Pence said.

“Again with those ancient words from the ancient text. Remember that if His people who are called by His name will just humble themselves and pray and turn He’ll do like He’s always done,” Pence said.

“In much more challenging times than we live in today. He’ll hear from Heaven. And He’ll heal this land.”