NASHVILLE, Tennessee-  When I interviewed the Nashvillains I mentioned that they were like a modern country music supergroup. Turns out they agree.  Signed to Fate Entertainment, the newly formed country-rock-infused band is made up of veteran musicians Troy Johnson, Brett Boyett, and Scott Lindsey.

The band members have musical resumés that most only dream about. The Nashvillains’ inception stemmed from the seasoned veteran musicians’ shared love of country music and rock and roll. Each member has been successful in their own right before coming together to record their debut full-length studio album, due out in 2021. Collectively, they have written and produced music for feature films, television shows, and major artists like The Chicks, Keith Urban, Cassadee Pope, James Taylor, Lauren Alaina, among many more. 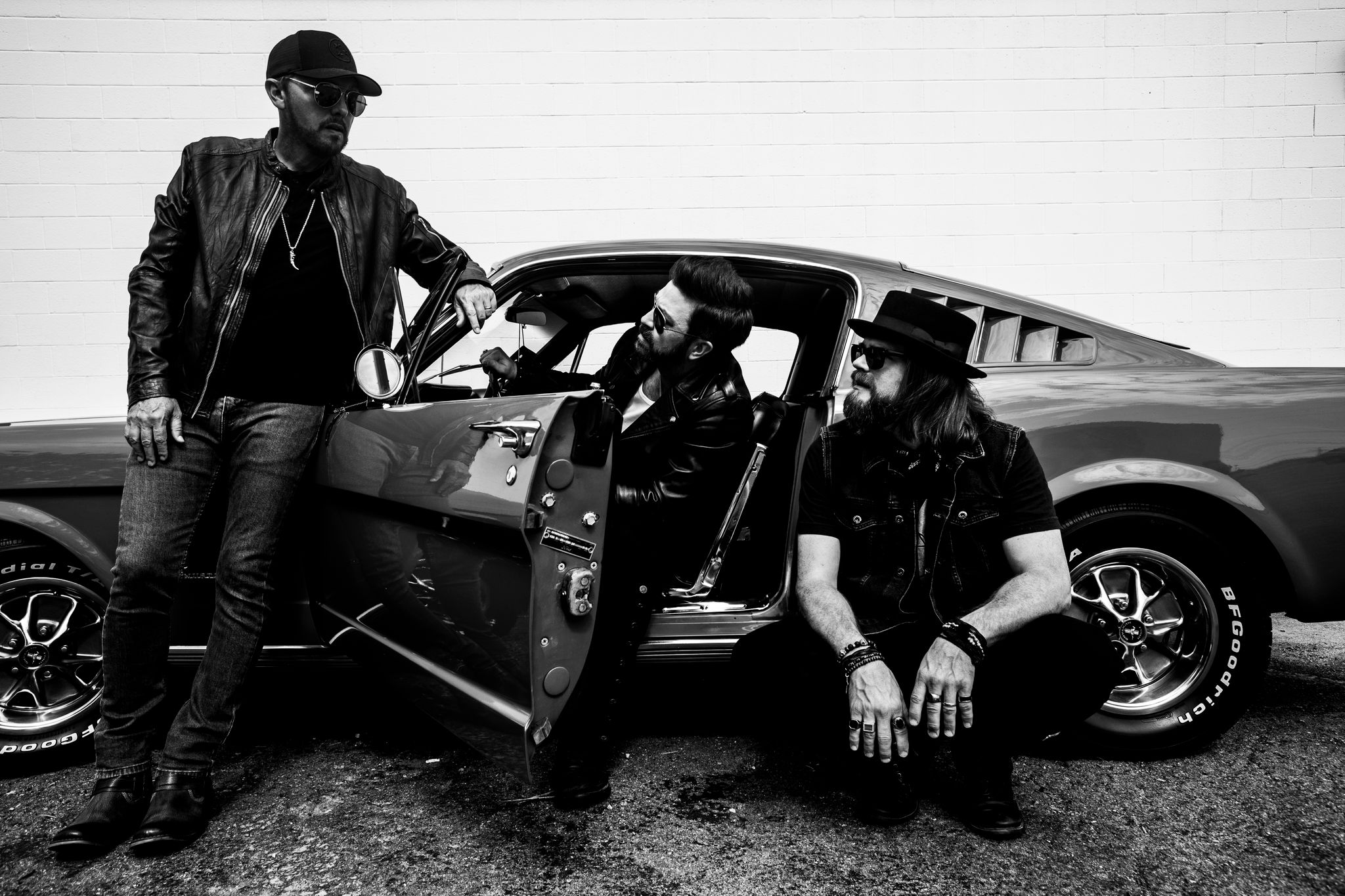 Boyett who works widely in the sync licensing world, met Johnson when he was singing on the demos of a movie they were working on. Lindsey also met Boyett when he was in Los Angeles doing some songwriting. At that same time, Johnson and Lindsey were both working for A Million Midnights Music Publishing. They were all working on a film together.

Formed about 2 ½ years ago, Boyett is the quasi-leader of this talented trio. He stated, “The first time we knew we sounded good together is the first writing session we had.” The first song they wrote is called “Dare to Catch Me” which was recorded and filmed in L.A.

After the film wrapped, they all moved back to Nashville. Boyett explained, “That was kind of the inception of the band. I’ve got this idea and I loved [Johnson’s] voice. Scott and I were talking. I had this dark-country, Pink Floyd kind of idea. Scott said ‘yeah, let’s call Troy.’”

Johnson countered, “Let’s see where this goes.” He continued, “I approach every career move with a slight bit of trepidation. But they came to my office and I liked the idea, the concept. I liked the fact that a niche that I had not seen anybody try to fill. We started out trying to focus on more of a cinematic flavor where we would write music that would fit behind an apocalyptic scene.”

Since apocalyptic films are so popular and the group was already immersed in the sync world, it just made sense. The first several songs they wrote were of that nature.

Johnson expounded, “We started working on it. Brett took several songs, put some tracks on them, and built them out in his studio. As people started hearing it, they were like, ‘Hey, what the heck is this?’”

They started getting good responses and they realized they had a little more than just a “sync band.” They started taking steps in creating a live performance band. The trick, however, was to maintain the artistic integrity while making the dark country-rock sound to which they aspired.

It is refreshing to see a group that is making music because of their love for it.

“There is a constant tension between trying to approach the radio ear and still retain the integrity [of the music], Johnson further clarified. “That quite possibly might provide the excitement and tension that people might like.”

To keep the ball rolling during the pandemic, they started streaming a “Nashvillains Happy Hour” live on their YouTube channel. Having talented, famous friends makes for a good time for the guys as well as the fans.

“It’s fun to bring them on and hang out and talk to them. We can find out their story and if they have written a hit song or two, we learn the story behind the song,” said Boyett.

Johnson added, “It allows us to get to know them even more. It’s been a heck of a lot of fun for sure.”

Two songs that they have recently released are “Baby Go Boom” and “Tumbling Down.” These two songs are very different from each other.

Lindsey concurred, “With “Baby Go Boom” we needed something that was a little different from everything else because a lot of what we had written at that point was dark and broody.”

Although Boyett often starts with the melody when songwriting, they all know how important a good lyric is and Johnson gravitates to a concept or idea first.

He stated, “It doesn’t go very far if I am not saying anything. When I have words to say that helps dictate where the melody should go.

Lindsey added, “It always goes more quickly if I am writing toward a hook.”

Nashville songwriters are famous for their “book of hooks” that they bring to their songwriting sessions. They are lists of titles and clever spins on clichés.

When the Nashvillains get together, they are quite diverse, yet so talented, it makes for a fascinating sound. Their cover of the “Modern Day Bonnie and Clyde” with James LeBlanc is not to be missed. Also, Johnson’s vocals on “Rolling in the Deep” will make you think ‘Adele who?’

But the most interesting cover they have done is Miranda Lambert’s “Kerosene.”  Their dark-country version of the song turns it into a heart-wrenching lament of lost love.

Their most recently released single is their self-penned song, “Tumbling Down.”

Offering a taste of what is to come from the band’s forthcoming album, due out later this year, the new original song shows what seasoned, multi-faceted songwriters are capable of.

“We wanted to write something that painted a picture of the chaos in the world and the hardships that we all endure. This song has been an autobiographical journey for many of us in the band,” commented Boyett.

They are currently working on an album and hope to have it out by the end of the year. In the meantime, they will be releasing singles from it throughout the year.

This newly formed group looks to create a fresh musical landscape by blurring lines between genres, bending the rules of convention, and expanding country music. The sonic landscape of the Nashvillains is accomplished through using traditional instrumentation with creative modern programming while emphasizing the dramatic and untold stories that are rarely touched upon by today’s popular country music.

Boyett summarized, “For me, this is the band that I always aspired to put together. It’s such a great combination of the styles and talent of the three of us. It’s a fun project to be a part of.”

Keep a lookout for their new music and follow them and their Nashvillains’ Happy Hour on their Youtube channel.