Shockingly, the documents Fulton County provided later, have less information on them indicating that they were produced earlier in time.

The documents were provided by Fulton County in two separate responses–one in January and one in May– to open records requests made by The Georgia Star News, which remain incomplete even six months after the election, The Star News reported.

In December, The Star News made an open records request that Fulton County produce copies of all transfer forms documenting the chain of custody in the transfer of absentee ballots that were deposited in drop boxes to the county registrar during the November 2020 election.

On January 22, Fulton County officials responded with two PDF files with names that ended in “BX_1” and “BX_3” that through preliminary review appeared to include records for 36,635 absentee ballots placed into drop boxes.

In addition to the appearance of missing a PDF file ending in “BX_2,” the number of absentee ballots contained in the two files was significantly less than the 70,000 that was expected to have been deposited into Fulton County drop boxes, The Star News reported.

On April 8, these findings were shared with Fulton County officials, who sent an automated response the same day and then followed up on April 15, extending their response time to April 19.  The response time was later extended again until April 23.

In other words, no transfer forms were provided for the 18-day period of October 6 through October 22.

The requested records were made available via a zip drive by Fulton County on May 3 and picked up by The Star News the same day.

At the time, Fulton County officials indicated that all of the relative documents were re-scanned onto the zip drive.  This time, the absentee ballot drop box transfer forms were saved in separate files, named for the date of the ballot collection.

In addition to providing more transfer forms than the two previous PDF files, “BX_1” and “BX_3, the zip drive also included many duplicates of the transfer forms contained in the two earlier files.

An analysis of the drop box transfer forms conducted by The Star News and reported on here, revealed that, along many other irregularities, 85 percent of the absentee ballots were not “transported immediately,” per the State Election Board Emergency Rule.

But a review of the absentee ballot drop box transfer forms for October 25 is a study in itself.

According to the “BX_3” file from January, 37 collections were made from Fulton County’s absentee ballot drop boxes and documented on a corresponding transfer form.

At first glance, the “October 25” file on the May 3 zip drive appears to have duplicated 33 of the transfer forms from that date.

However, closer scrutiny revealed that all 33 of the transfer forms in the “October 25” file on the May 3 zip drive had no name or signature by the registrar/designee or time of transfer by the collection team.

Yet, all the transfer forms for October 25 provided in the “BX_3” file from January – including the 33 provided in the later file of May 3 – had a name and signature by the registrar/designee along with the time of surrender by the collection team.

Additionally, the number of ballots recorded on the transfer forms from the October 25 drop box collections were changed 15 times in the “BX_3” file from January as compared to the “October 25” file of May 3.

Even within the “BX_3” file from January, one transfer form for the Adamsville / Collier Heights Library dated October 25 was scanned twice. 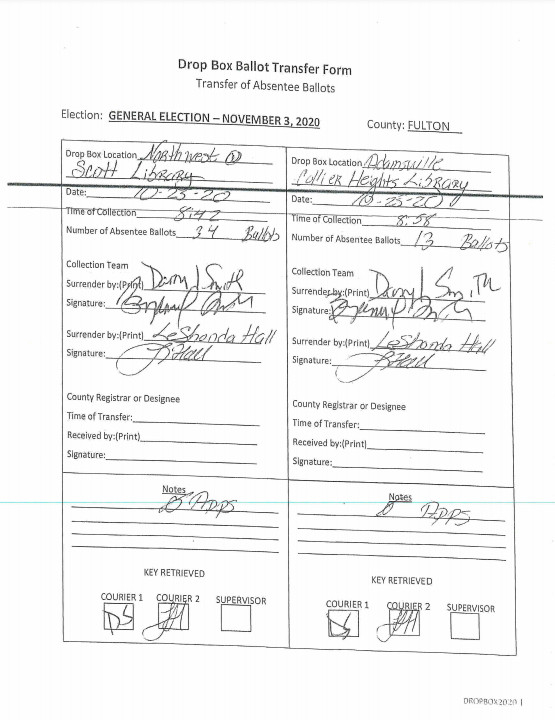 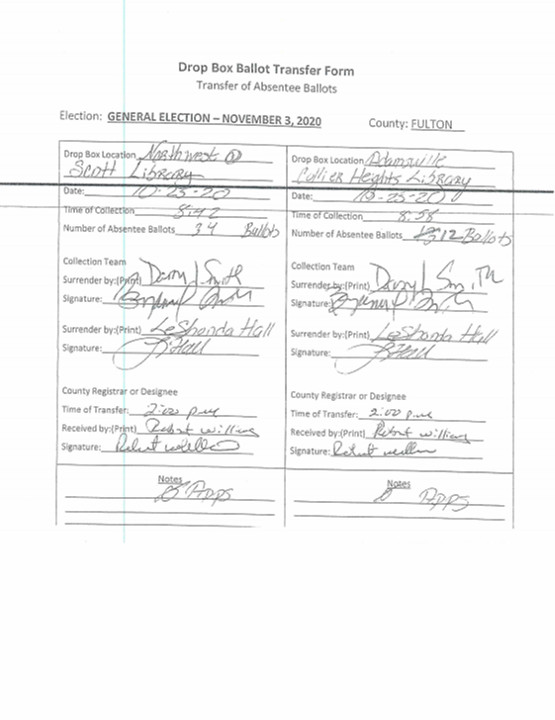 The discrepancies in documentation go beyond those with the transfer forms.

The spreadsheet documenting the daily count of absentee ballots from drop boxes for October 25 differed from the corresponding transfer form 16 times.

In 12 of the 16 instances, Fulton County’s daily count spreadsheet recorded the number of ballots from the transfer form before it was changed and signed by the registrar/designee.

In the remaining 4 instances, the number of ballots recorded on the daily count spreadsheet was a completely different number than recorded on either version of the transfer form and is probably attributable to typographical errors.

The net result in the difference between the changed and signed transfer form and the daily count spreadsheet is a difference of 58 ballots across only 16 transfer forms from just the one date of October 25.

Meanwhile, the November 3 presidential election was decided by 11,599 votes in the state of Georgia.

Laura Baigert is a senior reporter at The Star News Network, The Tennessee Star, and The Georgia Star News.