Six months after the November 2020 election and after failing on two occasions to produce complete chain of custody documents for absentee ballot drop boxes, the Fulton County Registration and Elections officials advise that “more time is needed.”

Fulton County’s reply to The Georgia Star News came as a response to a follow-up on previously-supplied records related the transfer forms that document the critical chain of custody for absentee ballots deposited over a 41-day voting period in 37 drop boxes placed throughout Fulton County.

Such forms are required to include the date, time, location and number of ballots collected as well as the names and signatures of the two-person drop box ballot collection team.

The Star News made an initial open records request for the transfer forms on December 1, 2020.

At the time, Fulton County officials said they believed the responsive records could be provided by January 19, 2021.

Documents provided by Fulton County, not until January 22, were examined by The Star News and found to be insufficient to the request.

Two PDF files were provided with labels ending in “BX_1” and “BX_3” that included records for 36,635 absentee ballots deposited into drop boxes.

In addition to it appearing that a PDF file ending in “BX_2” was missing, the number of ballots was significantly less than what was expected for Fulton County, The Star News reported.

Another open records request was filed with Fulton County on April 8 by The Star News, which Fulton County replied to a week later extending the response time to April 19.

On April 19, the large size of the file required more time for review, according to Fulton County Registration and Elections, with a new anticipated completion date of April 23.

On May 3, five business days after the new anticipated completion date, Fulton County made available a thumb drive that purportedly contained all of the requested documents, including a re-scan of those provided on January 22.

Once a thorough review was conducted by The Star News, Fulton County’s own documentation showed that 385 transfer forms representing 18,901 absentee ballots deposited into drop boxes were still missing.

The spreadsheet tracked the number of absentee ballots and absentee ballot applications picked up over the 41-day voting period from the 37 drop box locations throughout Fulton County.

After comparing the transfer forms provided by Fulton County election officials in the January 22 and May 3 open records request responses, The Star News highlighted in yellow on the Fulton County spreadsheet the collection dates that were still missing.

On May 21, Fulton County responded, acknowledging response of the correspondence regarding Open Records Act Request with Reference #R003465-051721, dated May 17.

The emailed response on the letterhead of the Office of the Fulton County Attorney included the full text of the request by The Star News’ Tiffany Morgan:

We are in receipt of a thumb drive which we picked up in person from your office on May 3, 2021 that contains scans of documents responsive to our Open Records Request Reference No: R002457-040821 for chain of custody ballot transfer forms for absentee ballots deposited in drop boxes in Fulton County for the November 3 election.

We have reviewed those documents, and it appears that you provided documentation for about 59,000 ballots. The accompanying spreadsheet you provided – a file named “Copy of Absentee Ballot Drop Box – Daily Count – November 3 2020.xlsx” – said there were about 78,000 ballots cast in the November 3, 2020 election.

Please:
(1) Provide us with the “missing” documentation on these 19,000 ballots
(2) Explain the discrepancy

Fulton County Registration and Elections’ Mariska Bodison responded by saying, “Sorry for the delay; however, more time is needed to review your findings.”

The Act, according to the Prosecuting Attorneys Council of Georgia, requires a response to an open records request within three business days.

The full email from the Office of the Fulton County Attorney can be viewed here. 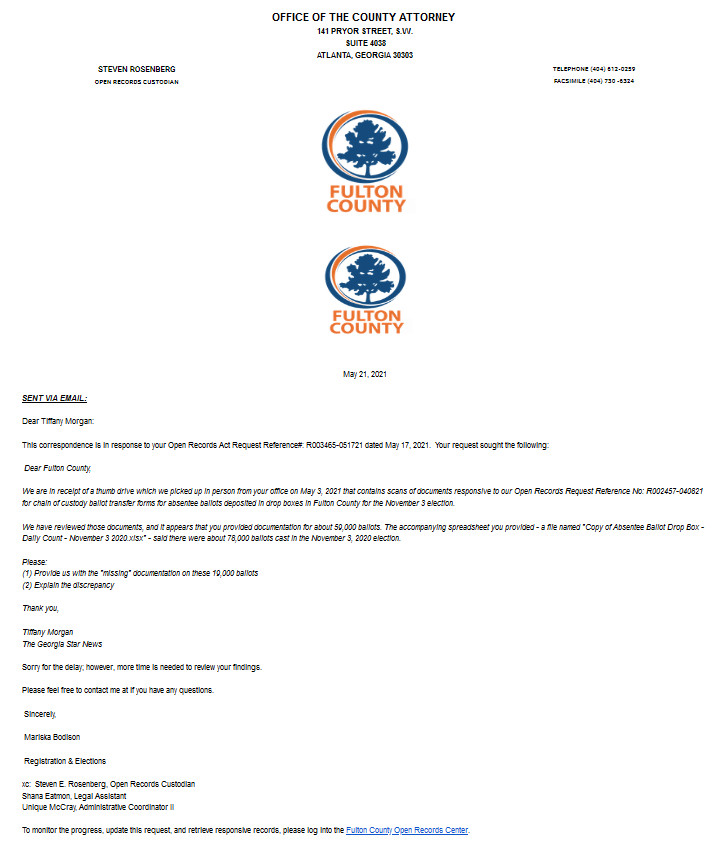 Laura Baigert is a senior reporter at The Georgia Star News and The Star News Network.
Photo “Mail in Ballots” by Cindy Shebley. CC BY 2.0.