An analysis of Nevada state voter data shows a 9,000-vote difference between those marked as having participated in the 2020 General Election and the number of ballots actually cast.

The non-partisan Voter Reference Foundation (VRF), which officially announced its launch this week, compared the states’ official certified vote totals to the state official voter files, which indicate how many individual Nevada voters were recorded as actually having cast ballots last November.

It found that 15 of Nevada’s 17 counties certified more ballots cast than there were individual voters recorded as voting. Clark (5,869 more) and Washoe (2,191) had the largest discrepancies, according to the analysis. 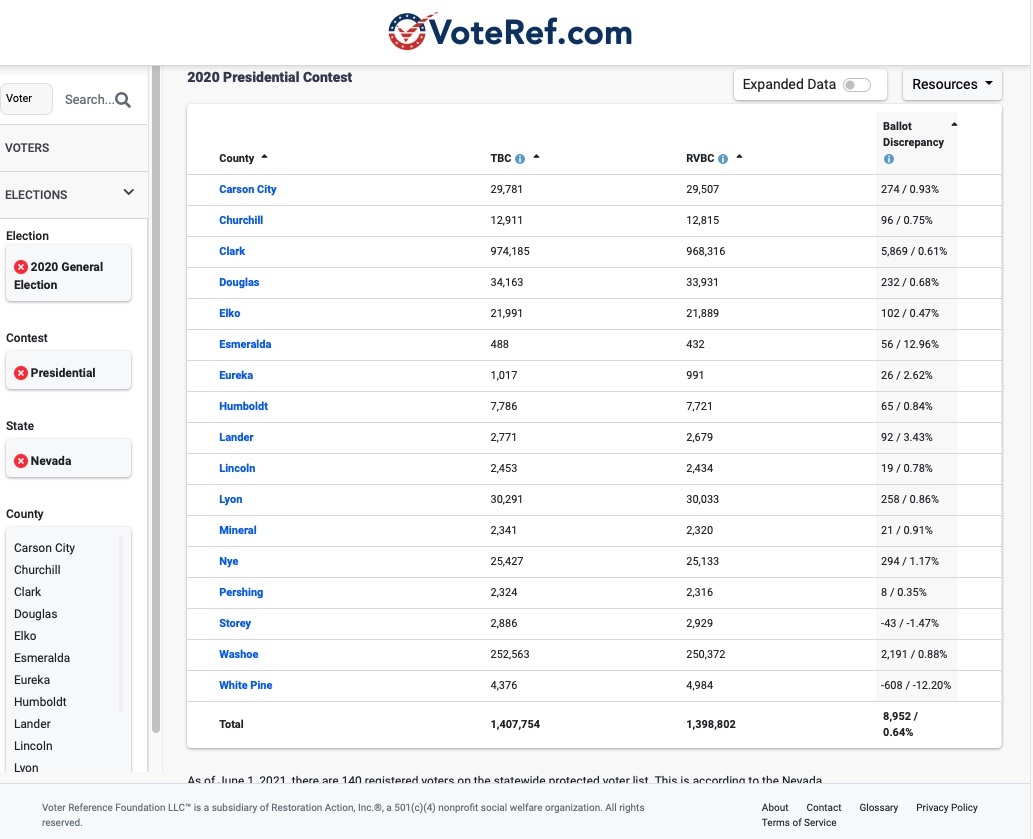 In conducting its Nevada analysis, VRF said it obtained the state’s file of registered voters and their voting histories. Those listed as having voted in 2020 were then extracted and totaled by precinct. Those totals were then compared with the state’s official certified totals.

In a news release, VRF said it has analyzed more states than Nevada. In all of them, the “totals do not match.” It plans to release more state analyses in coming weeks.

“Posted in searchable format for the first time in American history”

VRF has posted its Nevada analysis and all of its underlying source data– including individual voter files and histories– on VoteRef.com, a website it launched Thursday.

“Often criticized as sloppily kept and infrequently updated, voter registration lists for all 50 states will be posted in searchable format for the first time in American history,” said VRF’s news release. “Citizens will be able to check their voting status, voting history, and those of their neighbors, friends, and others. They will be able to “crowd-source” any errors.”

Gina Swoboda, who previously served in the election division of the Arizona Secretary of State, is serving as executive director of VRF,  which says its mission is “to provide public access to official government data pertaining to elections, including voter registration rolls.”

“VoteRef is the beginning of a new era in American election transparency,” Swoboda said. “We have an absolute right to see everything behind the curtain. Too often election information is de facto secretive — it might technically be accessible but the average citizen has no idea how to access it. Today, that begins to change.”

The VRF was created by Restoration Action, an educational 501c4 organization founded by West Point graduate and entrepreneur Doug Truax. It is based in Downers Grove, Illinois, in Chicago’s Western Suburbs.