A leader of Southington, Connecticut’s Families for Freedom organization told The Connecticut Star she views the district superintendent’s support for a teacher who introduced a vocabulary worksheet for high school students, instructing them in the tenets of Critical Race Theory (CRT) and gender ideology, as a “slap in the face to parents.”

“We are going to be pushing for policy change because it was clear that this teacher taught outside the curriculum,” said Susan Zabohonski during a telephone interview. “Taught a biased paper without following the proper procedure. Yet, the superintendent said he’s still going to back this teacher and all teachers going forward.”

As The Connecticut Star reported, a Southington High School English teacher’s student worksheet that defined vocabulary terms often associated with concepts from CRT, such as “systemic racism” and “white privilege,” and from gender theory, including “cisgender” and “gender-non-conforming,” drew anger from parents, students, and members of the community who expressed their views at a board of education meeting September 8.

Following that board meeting, Heidi Lockwood, a philosophy professor and the graduate coordinator of the Women’s & Gender Studies Program at Southern Connecticut State University (SCSU), forwarded a letter to media (including The Connecticut Star) and the Southington Board of Education. The letter was signed by over 60 faculty and administrators at SCSU in support of the Southington “teacher’s right to discuss the concepts listed in the handout.” 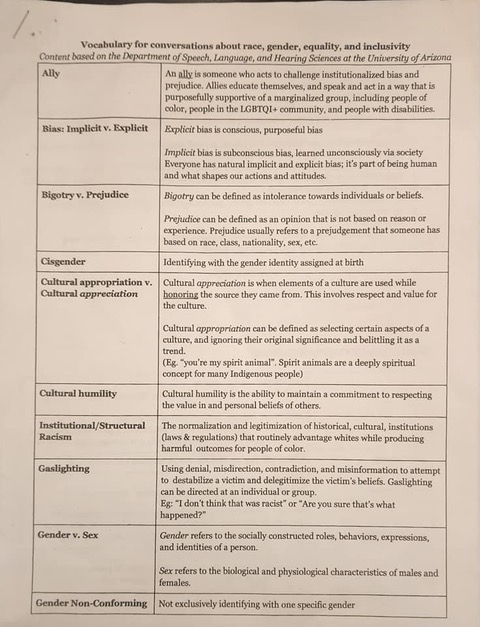 “I want to add that one of the reasons that we were quick to organize a response when a current student sent us a link to your article last week is because attacks like this are exacerbating the teacher shortage in Connecticut,” Lockwood wrote. “Our student educators are increasingly hesitant about going into K-12 education, particularly secondary education, given the perception that everything they say may be carefully monitored and policed by politically motivated watchdog groups.”

As parents, professors, and teachers of teachers, we write to let you know that we are dismayed by the fact that the Board seems to be engaging in partisan politics, restricting the free speech and academic freedom of teachers who are struggling to teach in remarkably complex and difficult times.

“What, exactly, is wrong with a worksheet that provides simple straightforward characterizations of concepts such as ‘marginalization’ and ‘white privilege’ as a way to help students contextualize literature?” the SCSU staff members asked.

The academics continued they “strongly support parental rights in the home,” but assert parents’ rights end there:

[W]e want to emphasize that very few parents are experts in education. While they are — and should be — free to engage in any conversations and language at home, parents should not be responsible for deciding whether teachers follow, for example, a whole language, phonics, or balanced literacy program. They should not dictate how teachers implement common core math standards. And they should not determine which texts are read, and what language is introduced in order to make sense of those texts.

“To say that this issue is the cause of the teacher shortage is just absurd!” Zabohonski responded in a letter on behalf of Families for Freedom.

She elaborated to The Connecticut Star:

The teacher shortage is caused by a number of things – the whole COVID debacle. Certainly, I know a number of teachers who quit because of that, and nurses, as a matter of fact, as well. You know, we could talk about all kinds of professions that lost a lot of staffing because of their COVID protocols.

The Star News Network reported Thursday, in fact, that the New York City Department of Education had fired yet another 850 teachers and aides for refusing to comply with its COVID vaccine mandate, bringing the total number of school employees terminated over the mRNA shots that have not prevented the spread of infection to 2,000.

“So that’s definitely one reason, and the other reason is because kids are unruly, and kids are allowed to run rampant without consequences,” Zabohonski continued. “This is the problem with our society today – nobody wants consequences for their actions.”

The parent organizer said her group is now pushing for policy change, based on the English teacher’s decision to teach outside the curriculum, and Superintendent Steven Madancy’s support for the teacher:

It was disappointing to us that it basically sent a message to children, in my opinion, that, hey, if you don’t follow our policy, you know, we’re going to applaud you. So, I thought that was disgusting. You know, here they’re talking about teaching, that we should be teaching valuable life lessons, and what kind of lessons did you just send to the students? That this teacher got a paid vacation, basically, for three weeks at the taxpayer expense, and then is allowed back to teach?

“This has been an unfortunate distraction for all of us,” Madancy said, according to CT Mirror. “We want parents to know that their children are in a safe and inclusive learning environment, and we must not rush to judgment. We should support and respect our teachers and their dedication to our students.”

The superintendent insisted the school district does not teach CRT.

“It’s not a part of our curriculum or anywhere within it,” he said. “It’s a higher academic framework that’s used by institutions like universities that’s well beyond K-12 public education. There’s absolutely no relevance to CRT whatsoever with the materials in these documents.”

Tony Kinnett, a former administrator for the largest school district in Indiana, and now an education journalist, presented a video, before he was fired, about what school officials often mean “when we tell you that we aren’t ‘teaching’ Critical Race Theory”:

As an admin for the largest school district in Indiana, here's what we mean when we tell you that we aren't "teaching" Critical Race Theory: pic.twitter.com/f6RLghcw2R

During a second board of education meeting Thursday, parent Michael Kryzanski said the teacher’s handout “is of great concern to many parents in town and outside of town as well.”

“The event was just one of many that are happening in public schools throughout the country,” he continued. “Parents are on edge. They want to return to basics in the school system. Parents want politics out of the classroom.”

Kryzanski said he wanted to be sure “mechanisms are in place before the start of each school year to remind teachers about following the curriculum and bringing outside controversial racial and sexual materials into the classroom.”

Kryzanski expressed his view that teacher candidates “are being politicized at teacher training colleges, and politics and ideologies are being brought into the classroom by teachers and their agendas where they don’t belong.”

“The best teachers are ones that students cannot guess where they stand on the issues of the day,” he added. “I encourage parents to speak to your kids about what materials you feel are not appropriate in the classroom and tell your kids to inform you when they witness something being presented by a teacher that is not appropriate.”

The Connecticut Star reached out to Superintendent Madancy for comment and is awaiting a response.