The Georgia Star News filed an open records request on Tuesday, December 1, for all “ballot transfer forms” from the Nov. 3 General Election in Fulton County. 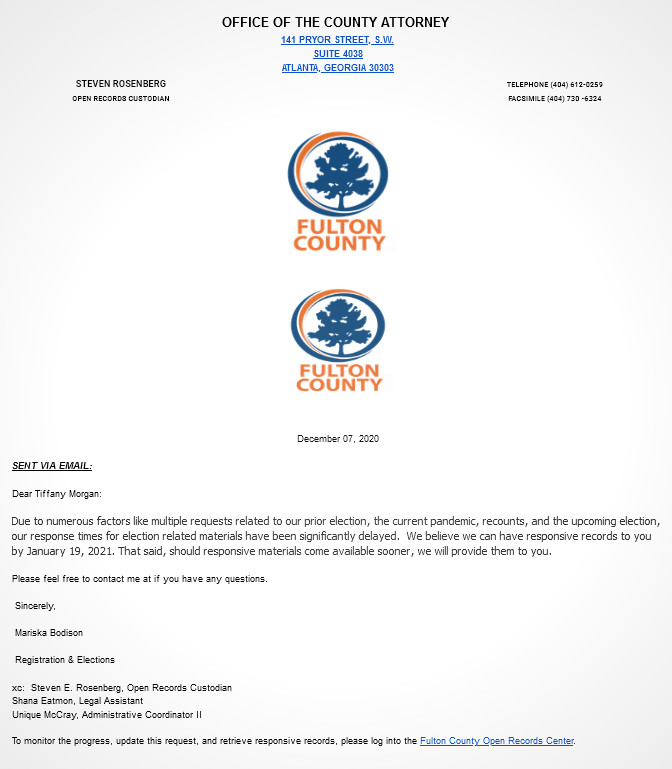 Fulton County stated: “We believe we can have responsive records to you by January 19, 2021. That said, should responsive materials come available sooner, we will provide them to you.”

January 19 is two weeks after the Georgia January 5 runoff will take place – one day before Presidential Inauguration Day.

There has been no response from Fulton County in regard to the open records request filed. According to the Georgia Open Records Act:

Any citizen of the state can request public records and requesters do not have to state a purpose. Once they have been obtained, there is no restriction on how records can be used, and agencies have three days to supply a response.

As previously reported by The Georgia Star News:

Throughout the state, approximately 300 drop boxes were used to collect absentee ballots in the November 2020 general election, authorized under Georgia Election Code Emergency Rule 183-1-14-0.8-.14 passed in July 2020 which states that every absentee ballot drop box collection team “shall complete and sign a ballot transfer form upon removing the ballots from the drop box, which shall include the date, time, location and number of ballots.

The “ballot transfer forms” are a part of the new rule and were created in order to document the chain of custody of ballots collected from drop boxes.

Additionally, Gwinnett County advises they are working on locating the forms but has not produced them yet, and Fulton County has not even responded to The Star News’ requests.

An open records request was filed with DeKalb County as well, requesting the same documents. The Georgia Star News previously reported that they were received from Assistant County Attorney at DeKalb County Dexter Q. Bond, Jr., stated, “it has not yet been determined if responsive records to your request exist.”

Tiffany Morgan is a reporter at The Georgia Star News and the Star News Network. Email tips to [email protected]
Photo “Atlanta” by Fulton County Clerk.

11 Thoughts to “Fulton County Says It Will Provide Chain of Custody Records for Absentee Ballots from Drop Boxes by January 19, 2021 – One Day Before Presidential Inauguration”